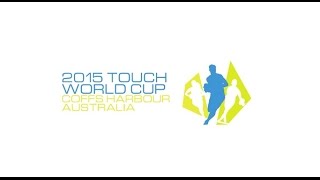 The Touch World Cup Starts tomorrow in Coff’s Harbour Australia. You can follow the fixtures and results at www.touchworldcup.com We will also be sharing posts from the official facebook pages of the tournament (through In2Touch‘s facebook page) as well as from various of South Africas teams and players… 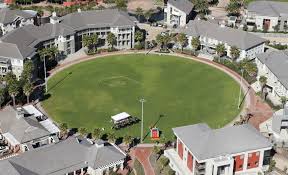 The Century City Annual Sports Festival takes place from the 27th Feb to the 1st of March 2015. The Touch happens on Friday afternoon for Schools and Friday night for Corporate and Open.

Last years event was oversubscribed  so dont miss out this time! Get your entry in now! 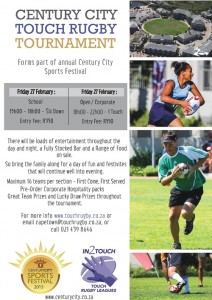 SUMMER LEAGUE  is just around the corner and In 2 Touch is proud to bring you the most amazing leagues around!!! The leagues kick off from the 26th of January and it is best to speak to your local league manager to find out the exact date.

For more information, contact 08600 TOUCH (86824), or email info@touchrugby.co.za or register your team online at the following link Click Here

Tommy the Tomato made his first appearance on tour and he set the tone for a great day of Touch.

Because of the limited space on Onrus, 2 fields meant a very compact straight knockout draw. This didnt deter the players and 43 teams entered into the competition…

All sections were hotly contested…

The junior section was won by the Beach Barbarians who narrowly beat the Stellie Drifters in the final by two tries to nil.

Whilst the final of the Pro Series went down to a sudden death drop-off with the Score Living Legends edging out the Vigo Warriors with a one – nil scoreline.

The action now heads off to Struis Baai where the action takes place on the grass on Tuesday 23 December.

What a day in the Strand!

What a day at Strand Beach!!! 59 Teams took part in what was the biggest Touch Tournament in the Strand for some time!

With the Pro Series taking a break, the tournament gave some of the upcoming players and teams an opportunity to mix it up with the big guns and man they didn’t disappoint with some spectacular upsets before the latter end of the tournament.

The Junior section is fast becoming a major part of the series with 17 teams lining up… The Tribal Kingz and the New Born Squirrels seem to be the teams to beat in this section and the expectation for the next leg in Onrus is tangible.

At the end of the day the Strand event was won by the hometown favourites, The Score Living Legends. They beat the Dwergies by the narrowest of one nil margins.

The Junior section was won by the Tribal Kingz who beat the GFR Jnr’s by three tries to two.

The Plate was won by Team Warrior who beat the New Borne Rebels in the final.

See you all at Onrus on Sunday!