A brisk South Easterly wind greeted the crew, players and spectators at the Camps Bay beach on Sunday. Whilst the wind stuck around the whole day, it was not strong enough to deter the players and fans from witnessing some of the most exciting touch seen for a long time…

In what is fast becoming a highlight for spectators, the under 15 section attracted 13 teams and these kids showed their metal with some excilerating touch being played.

The Open section was easily the most competitive in years with massive amounts of talent on offer… This section was eventually won by the Samurai Warriors who defeated Team GFR in the final by one try to nil.

The plate competition was won by team Impact who defeated the Almacassari in the final by two tries to nil.

The highlight of the day was naturally the Pro Series. With lots to play for, tempers flared and the occasion threatedned to get the better of the players and spectators. The final was contested by the Amazing Galaxy Warriors (AGW), playing at their “home ground” in Camps Bay and the VIGO Warriors who overcame the reigning champions, the Score Living Legends, after a mammoth ten minute sudden death drop-off in the Semi Final.

After going two nil up in the second half, the Vigo Warriors seemed to relax giving the AGW the opportunity to come back into the game. An equalising try came in the final seconds of normal time taking the game into sudden death. The game was finally won by the Vigo Warriors who now take a three point lead into the next Pro Series leg at Onrus on Sunday.

The All Gold Hot Summer of Touch moves to the Strand on Tuesday 16th where an Open competition with Plate and Juniors section will take place. There will be no Pro Series competition… Registration takes place from 07h45 and entries are on a first come first served basis.

See you all on Tuesday! 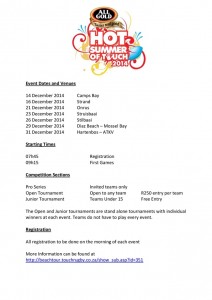 Its All Gold Hot Summer of Touch Time

Start getting yourselves ready for the biggest party of the year….

The ALL GOLD Hot Summer of Touch is just 2 months away. The same awesome action, the same awesome fun with Surf Guru Deon Bing driving the action and loads of giveaway’s from ALL GOLD, VIGO and VITAL VOOST, with amazing support from MFM and Die Burger, THIS IS SERIOUSLY GONNA BE THE BIGGEST PARTY OF THE YEAR!!!

Catch updates and awesome competitions on MFM, and in Die Burger in the build-up through November!!!

More about All Gold Summer of Touch 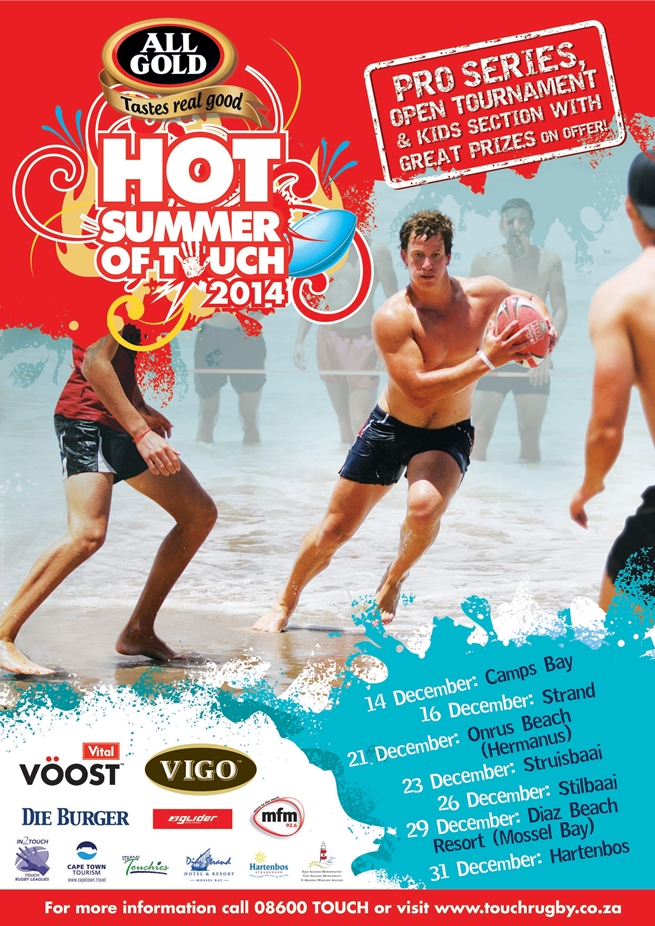 Spring is just around the corner and In 2 Touch is proud to bring you the Spring League!!! The leagues kick off from the 1st of September and it is best to speak to your local league manager to find out the exact date.

For more information, contact 08600 TOUCH (86824), or email info@touchrugby.co.za or register your team online at the following link Click Here