Winter leagues kick off at 9 venues around the country in and around the 26th of May. The compact season makes for great touch and many people often comment on it being the best season to play in.

For more information contact your league managers directly or if you are a new user / team, enter online by clicking here. For exisiting users and teams, please enter via the log-in page.

In 2 Touch and Western Join Forces

In 2 Touch and Western Smith have embarked on a new deal which will see the specially designed Western Touch balls being played with around the country.

The Western Touch Pro is most advanced touch rugby ball today. Its slim-cut shape, progressive weight distribution and superior grip, makes it the ultimate ball for this fast paced game.

The Western / In 2 Touch range will be available from April… 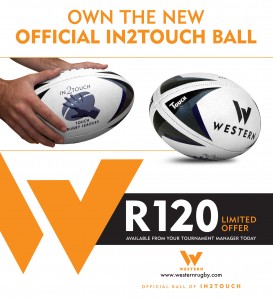 Thats right people, youv’e been calling for it, we’ve been searching for it, but finally the right venue has become available, the right operator has been found and in just under 4 weeks the people of Stellenbosch and surrounds will have their own league.

Van der Stel Rugby fields will host the league on Wednesday evenings and it is expected to launch with a bang on Wednesday the 12th of February.

The format initially will be traditional 1 Touch for men, but ladies and mixed 6 down leagues are anticipated to kick off soon after. Teams consist of 5 players on the field at any time and you can register an unlimited number of players in your team, however the maximum number of players per squad on an evening is 12.

Register your team online by clicking here or for more information email stellenbosch@touchrugby.co.za or call 079 071 9122.

Series Ends on a High

ALL GOLD HOT SUMMER OF TOUCH A HUGE SUCCESS

The thirteenth Hot Summer of touch was wrapped up in Hartenbos on Tuesday where a field of forty four teams played in searing heat on an unforgiving hard and dry Amphitheatre surface.

As with all the events in the series the touch was spectacular to watch and Springbok Willie Le Roux was one of the excited onlookers who enjoyed the action.

It was fitting that this years’ top two teams were the eventual finalists and once again the Living Legends took top honours with a convincing two nil win over the Reds.

The under fifteen section was once again won by the Rangers. Credit must be given to this great group of youngsters which travelled the entire circuit. They will definitely be a team to watch in the future. The plate was won by Daai Span.

Overall two hundred and fifty seven teams took part in the series with thousands of spectators witnessing some of the best touch rugby action seen for many years. Series director Grahame Bobrow said the level of competition has increased dramatically and the gap between the established professional teams and the next level of players was narrowing very quickly. “The competition was as strong as we have ever seen and the advent of the under fifteen section was a great innovation. With the help of event sponsors All Gold as well as We Chat and Wellington and Cola, the series was the best to date”

Living Legends Take it at Stilbaai

A stunning day in Stilbaai saw the Living Legends from Strand win the thirty fifth edition of Stilbaai Touchies and in so doing also winning the All Gold Hot Summer of Touch Grand Prix Title.

Going in to the tournament, the top four teams all had a mathematical chance of winning the series but the winner was always likely to come from one of the two table topping teams, the Reds and Living Legends.

The Grand finale was set up with both teams avoiding each other in the Semi Finals and then overcoming their opponents in the semi finals to meet in what was their third final of the season.

The superior experience of the Legends was the telling factor and in the end they edged their younger opponents by two tries to one and in so doing won their second title in four years.

The day was a great success with forty teams playing across three divisions. The Open Tournament was won by the New Born Rebels who qualify automatically for next year’s pro series having won 3 open tournaments this season.

The action moves to Diaz Beach in Mossel bay on Saturday and another big turnout is expected with loads to do for the kids and all the decks overlooking the fields.